I have always been interested in movement, music, art and the spiritual world ever since I can remember. When I was younger I concentrated on expressing myself through visual art, writing and music. I mainly did illustration, painting, guitar and kept my body active with skateboarding.

In my mid twenties life hit me hard, as it does many of us. I experienced some serious depression and experiences that pushed me to look at my life and ask myself what I was contributing to this world. I was working in construction and trying to figure out how to become an artist and a musician. I also was very close to my oldest brother, Duncan who's grasp on this world rapidly descended into schizophrenia and eventual suicide. This was a time where I realized I needed to understand how to be healthy in a more balanced way. I knew there was more of a connection between my emotional body, spirit, mental patterns and my physical being than I had previously known. I started actively studying: Capoeira, Yoga, Qi Gong, Meditation, Dance and Eastern Philosophy. It awoke, or really I remembered, a love I had long since denied.

I was initially introduced to yoga with my grandmother when I was about 6 years old. I would do some simple asanas and lion's breath with her early in the mornings when no one else was up. I rediscovered it with a Baron Baptiste video tape many years later and went onto practice various Hatha Yoga styles such as Bikram, Jivamukti, Sivananda, Forrest and Iyengar styles. I never really found what I was looking for, but I continued to practice in whatever classes I could find for years.

I trained Regional Capoeira with Mestre Efraim Silva in New Haven, Connecticut for a few years alongside Contra Mestre Pinga Fogo (now a Mestre here in Austin) and Profesor Fabiano Lucas. I got to train with many wonderful teachers such as Mestre Lobao, Mestre Jo and many others.  Capoeira was and is something I found to be incredibly fun, but I never really had any money back then and stopped training because I didn't have the $80 a month fee to keep training! This was also when I realized my brother was really not well and a lot of my emotional energy and time was spent on that. I eventually discovered something I felt was deeper and more resonant in Qi Gong and the large umbrella of Traditional Chinese Medicine.

I started my Qi Gong studies with Mantak Chia's book Awaken Healing Light of the Tao and practiced out of that book for years before I found a teacher that was nearby. I studied his Universal Healing Tao System intently with Jampa Mackenzie Stewart here in Austin for about 3 years until he moved away.  I also studied the 24 Yang Tai Ji short form with Jampa and one of his students while I was in massage school here in Austin. This was when I finally got to study Chi Nei Tsang with Jampa and Shanti Dechen.  I eventually met Master Yun Xiang Tseng in Houston after being urged to do so by a friend for several years. I immediately realized he was a wealth of knowledge whose integrity was very different than any teacher I had met before. I continue to study Tai JI, Qi Gong, External Qi healing, Yi Jing, Nei Dan and whatever he has to offer. The things I have learned from him are my base of support in my life. I am eternally grateful for meeting him and study with him as much as possible. I regard him as my main spiritual teacher.

I continued my yoga studies all along practicing Patthabi Jois's system of Ashtanga Yoga with several teachers in Austin and California. I am indebted to Ayelet Even Knur for showing me that Ashtanga can be fun and rewarding. I'm grateful to have practiced for a few years with Christina Sell when she lived in Austin and find her teaching and way of being to be the most grounded and useful approach to Asana I have come across. I went onto study some of Ashtanga's variants such as the Rocket and I also have recently studied with Dharma Mittra and his more classical approach to yoga asana, pranayama, yoga nidra and meditation. As much as I really appreciate all of these styles and methods I continue to practice something which doesn't fit into any of these. These days I don't abide to any yoga system strictly and do incorporate bodyweight training, capoeira and whatever works in there, because I feel like all these practices are beneficial to me. After years of practicing you have to find what works for you and I consistently find that most public yoga classes can only go so deep. The real work happens in your own practice and time.

I have always been drawn to Indigenous healing practices since I was a child and especially since my brother's internal battles which I always felt could have helped him. This is what led me to Malidoma Some, and my work with Amazonian Plant medicines and teachers such as Dara Freire and Pai Adolfo of the Templo de Umbanda Sao Sebastiao in Sao Paulo, Brazil. These practices deal with ancestral healing and communication on a very direct level.  I actually had just returned from a 5 day retreat in Brazil In February of 2020 right before Covid 19 changed things around the world.

For the last 13 years I have been practicing bodywork full time, the last 6 years in my own practice. I am interested in healing in all its myriad forms.  My Yogic studies, Taoist studies, Bodywork, Energy work, Shamanic studies and coaching all inform each other. I am interested in the common themes and the crossover of various traditions. 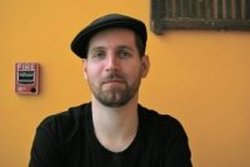 Joshua was always interested in movement, music, art and the spiritual world ever since he can remember. When he was younger he concentrated on visual art and music, mainly in the form of illustration, painting, guitar and kept his body active with skateboarding. In his mid twenties he experienced some trying times that pushed him to look at his life and what he was contributing to this world. His oldest brother was also diagnosed with Schizophrenia during this time and eventually committed suicide after years of frequent hospitalizations and medications.
This was also a time where he realized he needed to understand how to be healthy in a more balanced way. He started actively studying: Capoeira, Yoga, Qi Gong, Meditation, dance and eastern philosophy. It awoke in him a love he had long since denied.  He knew there was more of a connection between his emotional body, spirit, mental patterns and his physical being than he had previously known. He decided to make a change and start on a healing path by attending Massage Therapy School.

For the last 17 years he has studied Qi Gong, Yoga, Taoist Internal Arts and looked deeper into  Eastern and Indigenous practices in addition to his bodywork studies. He is interested in healing in all its myriad forms. As he got deeper into the Taoist arts he took his studies further into the art of Tai Ji, Yi Jing (also spelled I Ching) and the shamanic roots of China. His Yogic studies, Taoist studies, Bodywork, Energy work and Shamanic studies all inform each other. He is interested in the common themes and the crossover of various traditions. He has also continues to study the communal Indigenous practices such as the elemental, ancestral, ritual and divination traditions inspired by the Dagara people from Burkina Faso, as well as the various plant medicine traditions of the Amazon of Brazil.